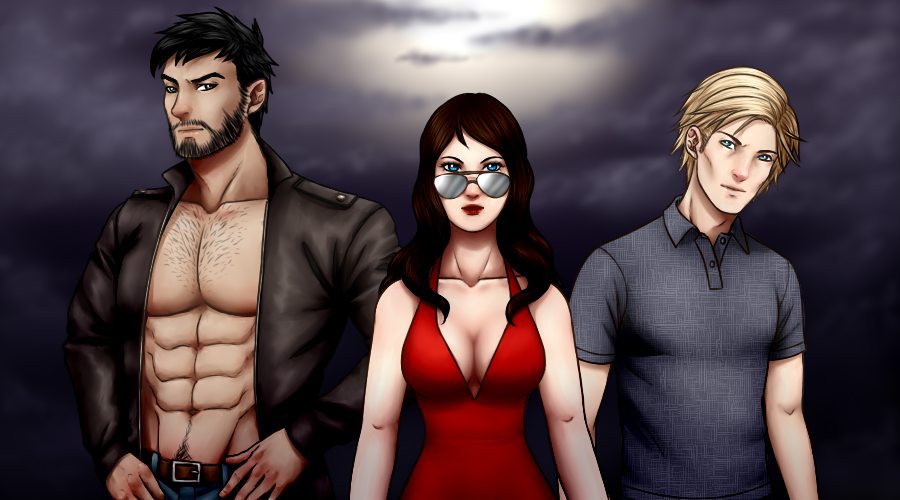 Hello guys! As promised, I have an excerpt to share from the second novel in the series, titled Lycan Legacy – Predator. I hope you enjoy the continuing story of Luna, Mason, and friends.

I felt the presence of the softball-sized chunk of granite an instant before it hit the back of my head. I jerked my head away, far faster than humanly possible, but the projectile still struck with stunning force.

I tumbled forward, driven by the rock and assisted by my legs, into a clumsy somersault. Time seemed to freeze while I hung upside down in midair, my long black hair flowing around my head, memories of high school gymnastics class flashed through my mind.

I landed on my feet and spun to face my attacker. My backpack dropped to the ground. Out of the corner of my eye, I saw a piece of my scalp had been torn loose and fallen to the ground. I felt the tingle as the ripped off section of scalp healed and tiny hairs started sprouting.

The attack hadn't enraged me, but ruining my styling sent me into a fury. I could heal the wound and regrow the hair, but it would be uneven until I could get it styled again.

“Bastard!” I growled through rapidly growing canines, “I'm going to gut you. Come out here and face me like a wolf.” The nails on my hands grew to slashing length in less than a second and I awaited his attack.

He stepped from the edge of the tree line, from shadow into the sunlight. We sized each other up; he was a lean man in jeans and a dirty T-shirt, about two inches taller than my 5 foot 7 inches, with the salt-and-pepper hair and beard of an older man, barefoot and with dirty feet. He smelled of wolf and unwashed human.

What did he sense when looking at me? A tall, female, American werewolf, with impossibly blue eyes?

“Tricky bitch,” he said. “You got the scent right. You got the claws right. But the eyes are fake. Female werewolves are rare. Blue-eyed females are impossible.”

His claws extended, and he continued, “And you stink of magic!” He leaped, covering the intervening space faster than his hurled rock, claws extended for a killing blow.

Unfortunately for him, I had fought and bested better wolves than him. As he approached, I grabbed his T-shirt, dropped to my back and curled my legs up to my chest. Planting my hiking boots on his chest, I pushed as hard as possible, sending him flying. The shredded remains of his T-shirt remained in my hands. I had a momentary regret about not wearing high heels; I could have done a lot of damage with the heels. Impractical for hiking, but perfect for stabbing.

But he was an experienced fighter. As he flew away, his foot claws slashed at my eyes; a strike that would have incapacitated me long enough to end the fight.

I “saw” the slash coming and turned my head to the right. He ended up slicing my cheek open and ripping my blouse to ribbons.

On my feet before he landed, I made to wipe the blood from my cheek with the remains of his T-shirt. I shuddered at the stench of the filthy rag, threw it to the ground, and wiped with my hand. I could feel the slashed flesh knitting over, smoothing out.

As he tumbled to the ground, I slipped out of my hiking boots and willed the claws on my feet to extend. As they slid out, I did that trick with my nail polish, making the first two inches of my nails invisible. Now I had invisible blades to slash with. Not fair, but werewolves never believed in fighting fair. The scent of magic from the polish wafted into the air.

Instead of leaping to the attack again, he proved his control over his wolf by coming to a halt ten feet away. He sniffed again, “More magic,” he said. “That won’t help you. You might be a were. But real werewolves,” he pointed to himself proudly, “are immune to magic.”

Then his eyes narrowed, “Are you using Yakuza tattoos? A real werewolf would know those will slough off the first time you shift.”

“No tattoos,” I said, holding my inner wolf from leaping out and attacking, “not a shifter, I’m the real thing.” His pacing was bringing him closer. I made an imaginary line in the dirt; if he crossed that line, I would attack.

I growled, and my teeth elongated, making it difficult to speak. “I promised a friend I could eliminate the werewolf problem in Hakone.”

“You, little wolf?” At least he was acknowledging my species. He continued his pacing. “You think you can eliminate—” He crossed the line and leaped to attack without finishing his sentence, an old human trick.

One that wouldn’t work on me. His intended pattern of attack flashed before my eyes, one of the magical gifts I had, and I easily evaded his slashes. He thought his longer reach and size would make this a quick victory. After several minutes of flurried slashes and punches, none of which landed, he was breathing hard. An out-of-shape werewolf? Or was he faking?

He wasn’t faking, his attacks slowed, and I started hitting back, with punches instead of slashes. He could have extended the fight by changing into his wolf form, but he couldn’t change the outcome.

I dropped low and slammed three quick rib-breaking punches into his chest. His gasping breath stopped for several seconds, mouth wide open in an attempt to get oxygen. I saw he was missing two teeth, with others crooked, and thought Why the hell doesn’t he fix his teeth? We learned to do that at our first change.

I thought he would collapse. But his ribs healed and he drew in another shuddering breath, then lifted his hands to continue the attack.

“Never,” he replied, adding a few weak slashes to his reply.

I peppered him with punches, breaking his nose and dislocating his jaw. “Submit, or die,” I said.

He couldn’t answer through his damaged jaw but just shook his head. Damn male pride. If I had been a male, he would have submitted long before. I briefly wondered how my mom would have handled this. She never seemed to have doubts about how to manage other weres.

“Then die,” I said, opening my fists up and extending my invisible claws. I batted away his blocks and slashed a row of furrows across his cheek and down his chest, just missing his carotid arteries. It was obvious I could have killed him with same blow.

Still, he resisted. He fell to his knees while shaking his head. His nose and jaw were already healing, allowing him to talk. “What the hell are you?” he muttered.

“The meanest bitch you’ll ever meet,” I said. I kneed him in the head, throwing him back on the ground. I jumped on top, the claws of my feet digging into his abdomen, ready for an eviscerating slash. I put my clawed hands around his throat and squeezed, careful not to nick any arteries.

He was probably strong enough to throw me off but risked decapitation from my claws. His face started turning blue. “Submit,” I whispered, like a mother wolf teaching her cub the rules.

He shook his head. It looked like his stubbornness would kill him. He saw the decision in my eyes, that I wouldn’t waste any more time with him, and retracted his fangs. He moved his mouth in an attempt to speak. I eased up on the pressure very slightly.

The sheer arrogance of his offer sent a flash of red through me, and my wolf almost came out. That would have been the end of him. I fought the wolf down. She retreated, whispering, “Not pack.” My hands tightened back around his throat.

Her comment gave me an idea. “Submit,” I said. Before he could shake his head again, I continued, “Join my pack. I’ll be your alpha.”

He froze for a second, opened his mouth to speak. I let up the pressure just enough for him to draw a shallow breath. “So, you want me to be your beta?”

Second in command, this hobo lobo? No fucking way. I squeezed tighter.

His eyes filled with fury. In them, I could see his wolf try to force itself out. He gritted his teeth and forced the wolf down. “The runt of the litter?” he spat. “No fucking way.”

I took a deep breath, I hated killing other werewolves, but sometimes it’s necessary.

“I’ll make it quick,” I said. I tensed my body, digging my rear claws deep into his abdomen, and started pulling at his neck.

“Wait!” he whispered. The fear in his eyes showed that he finally understood that I would kill him with no remorse.

I fought down the impulse to rid the world of this smelly, gap-toothed, old cur and loosened my grip on his throat.

“I’ve reconsidered your kind offer,” he said, “and I’m willing to submit.”

I tilted my head and gave him my “Really?” look. He nodded vigorously. I eased my claws out of his abdomen, unclenched my grasp on his throat and jumped up.

He could still renege and attack again. I watched as he tensed to leap up, then relaxed into a submissive posture. He tilted his head back and exposed his throat.

I stepped close and placed my clawed right foot on his throat. He shuddered but stayed still. “Do you submit? Accept me as your alpha?” He shuddered again at the idea of a female alpha but nodded.

A nod was not enough. His human side had to say the words, binding both wolf and man.

“Say it,” I said, pushing down with my foot.

“I submit,” he said. I waited a few seconds, then pushed down harder. “I submit and recognize you as my alpha.”

I bet you say that to all the girls, I thought.

Then said, “Welcome to the pack.” Advance Reader? What's that? Advance Readers are people who sign up to receive free advance copies of my books, with the understanding that they will provide reviews on Amazon.

First time authors really need to have reviews to have visibility on Amazon. Why don't you sign up for the ARC list? You'll get a chance to review my books before they are released.